Troops To Get Slim Jims Bearing Messages From Home 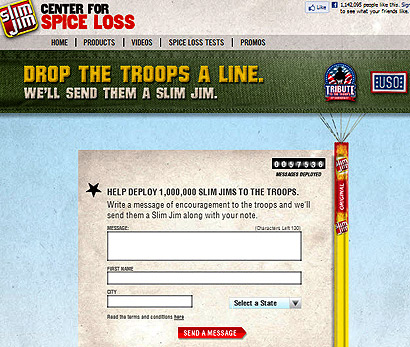 ConAgra’s Slim Jim brand is running a social/online effort to send individualized messages of support, along with free Slim Jims, to U.S. troops.

The brand has committed to donating up to $500,000 worth of product to the USO -- which translates to more than 1 million Slim Jims -- and up to 500,000 of the snacks will bear paper wrappers carrying individual messages that have been posted on Slim Jim’s Web site (slimjim.com/troops) and its Facebook and Twitter accounts.

The campaign, created by marketing agency TRIS3CT, is part of Slim Jim’s ongoing partnership with World Wrestling Entertainment and the annual WWE/USO “Tribute to the Troops” program, as well as the brand’s other troops-supporting efforts.

Slim Jim kicked off its messaging drive with a spot on WWE’s annual “Tribute to the Troops” special that aired on NBC on Dec. 19. The spot, which drives viewers to the message-posting area of Slim Jim’s site, has also aired a couple of times on WWE’s weekly programs.

But most of the messages posted thus far -- going on 58,000 as of Jan. 25 -- have been driven by sharing/viral activity generated through the brand’s Facebook and Twitter sites (which currently show 1.14 million “likes” and about 8,700 followers, respectively), reports Dan Skinner, manager, public relations/social media at ConAgra.

The messages on the wrappers are identified by the sender’s first name, last initial and U.S. city or location.

This new campaign represents a next step for the brand’s troops-oriented efforts, says Skinner. Last year, for example, the brand promoted an offer in which it donated one Slim Jim product to the troops for every two products purchased by consumers.

“Slim Jim is one of the most-requested snacks among U.S. troops -- it’s a taste of home for them,” Skinner tells Marketing Daily. “This year, we decided to add another meaningful component by sending the troops messages from home along with the donated Slim Jims.”

Consumers can post messages for the troops through Slim Jim up to April 1.