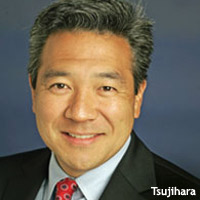 Ending the Hollywood parlor game of who will succeed Barry Meyer at Warner Bros., Time Warner has turned to Kevin Tsujihara as the new CEO. The move is surprising. In an era where content has become so lucrative, Tsujihara comes from the distribution part of the business.

His selection may be a nod to the growing importance of new distribution platforms and the technology wrapped up with them.

He takes over March 1, with Meyer remaining chairman of the company for the rest of 2013. Bruce Rosenblum, who heads Warner Bros.' TV arm, and Jeff Robinov, who oversees the movie studio, were also considered candidates for the top job at the venerable studio.

The TV production business has thrived under Rosenblum, continually offering some of the highest-rated shows on TV.

Meyer added that he “has skillfully guided one of the most complex businesses at Warner Bros. during a time of transition in the home entertainment sector, and has a deep appreciation and respect for the films and TV shows we create.”