Apple Releases iOS 6.1: 'Siri, Get Me Tickets for Les Mis' 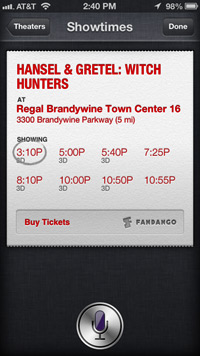 In an uncharacteristic move for launching incremental updates to its mobile OS, Apple formally announced Monday afternoon that iOS version 6.1 is now available. The first major update to the OS Apple launched last fall, 6.1, most notably adds LTE high-speed cellular network compatibility for 36 additional iPhone carriers and 23 additional iPad carriers globally. High-speed or 4G access is relevant to Apple’s other emerging services like the cloud-based iCloud and music Match platforms that give users ubiquitous access to their content.

The iOS mobile wallet app Passbook gains a promotional element. A card in the app links to featured apps that are Passbook-enabled.

On the fun side, iOS 6.1 also upgrades the voice command feature Siri, now integrating the interface with Fandango movie ticketing. Siri can order your movie reservations. Apple continues to promote the power of voice activation and search on its mobile platforms. It makes sense, since Siri searches are channeled into a range of search partners other than company archrival Google. When Siri finds nearby movies, the results include movie times and links that create a ticket ordering screen in the Fandango app.

iOS 6.1 also adds a new ability for users to reset the Advertising Identifier that Apple introduced with 6.0 as a more private replacement for the controversial unique device identifier system. The Advertising Identifier is supposed to be a non-permanent and non-personal system for tracking usage patterns on the phone for better targeting. The new reset option enables the user to force the phone to drop the current identifier for a new one.