Baton Rouge 'Advocate' May Have Buyer 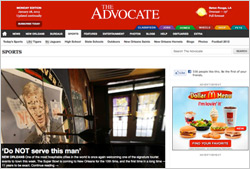 Just a few months after the New Orleans Times-Picayune cut its publication schedule to three days a week, Baton Rouge’s The Advocate -- which benefited from The Times-Picayune cut in the form of increased readership -- has received an expression of interest from a potential unidentified buyer, according to owner Capital City Press.

Over the last year, the Advocate’s daily weekday circulation has increased from 76,263 in March 2012 to around 98,000 today, according to the newspaper.

Much of this growth is attributed to increased demand in nearby New Orleans, where residents have been without a daily newspaper since The Times-Picayune reduced its publication schedule to three days a week in October 2012. The Advocate launched a daily New Orleans edition to fill this void.

The potential buyer is not interested in buying WBRZ-TV, a local ABC affiliate also owned by the family that owns Capital City Press, The Advocate reports.

Advance Publications' decision to cut The Times-Picayune's publication schedule, as well as the schedules of three other newspapers in Alabama, met a storm of protest when it was announced in May 2012. Local civic leaders, businesspeople and celebrities formed the "Times-Picayune Citizens' Group," which set itself a mission to “ensure the continuation of the delivery of a high quality, seven-day-a-week newspaper, with access to the entire community.”

However, these protests -- along with demands that Advance sell the newspaper to another publisher that would commit to continuing daily publication -- were rebuffed by Advance. It has since implemented similar schedule reductions at a number of other newspapers in other parts of the country.