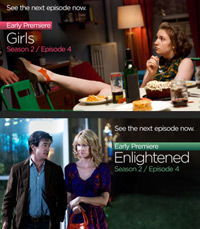 It ain’t just the Puppy Bowl and romantic comedy marathons anymore. When the annual juggernaut that is the Super Bowl rolls onto the TV grid each February, the rest of the slots pretty much roll over and play dead. Unless you have a football field full of adorable puppies, it is pretty hard to counter-program against a near-religious TV institution.

But this year competing networks have another arrow in their quiver -- the second screen. Multiple providers are touting the availability of their regularly scheduled shows in advance on other distribution channels.

HBO generally has a very strong Sunday slate of programming that leads with their marquee homegrown shows. This year, Girls and Enlightened are slated to run new episodes against the Super Bowl. But HBO is pre-empting the living room battle over the remote by giving HBO customers advance access to the new episodes the night before their initial TV airing via the HBO Go app and HBO On Demand. For one time only, Girls and Enlightened Sunday episodes will appear on Saturday night on these alternative distribution channels. HBO Go is available on iOS, Android, Kindle HD, Xbox 360 and Samsung Smart TVs.

Apple is also helping PBS circumvent the Super Bowl effect to that network’s Sunday ratings record-breaker Downton Abbey. iTunes users who bought a Season Pass to the currently running Season 3 of the blockbuster guilty pleasure of American Anglophiles can access all of the episodes, including this Sunday’s, before they air.

Here is an interesting wrinkle in ever-expanding skein of the second screen and the impact of having a personal, portable on-demand TV screen in the house. Networks can use it as a counter-programming device.