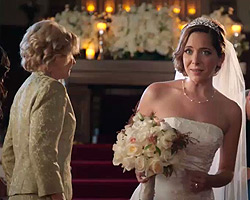 Century 21 is joining the trend of showing off its Super Bowl TV spot before the big game.

Super Bowl ads shared before the game get 600% more views (according to YouTube research). So the realtor is revealing its Super Bowl spot, along with three 30-second pre-game ads at century21.com/superbowl.

Selected by Century 21 Real Estate LLC system members via an online voting process, the final 30-second ad titled “Wedding” will air in the first commercial break of the third quarter and is part of a campaign with a comedic twist incorporating the theme “Is there a Century 21 agent in the house?”

All four ads portray Century 21 agents assisting home buyers and sellers during life-changing milestones like getting married, having a baby, sending a child to college or even winning the lottery.

The spots will be seen nine different times throughout the day on Super Bowl Sunday. In addition, Century 21 will sponsor a full one-hour pre-game show and a video segment to be aired on Game Day entitled "Home Town Heroes."

The spots are part of a cohesive campaign with a comedic twist that depicts Century 21 agents assisting home buyers and sellers during life-changing milestones: Getting married, having a baby, sending a child to college and winning the lottery. The campaign reminds viewers that no one is better qualified to help bring the dream of homeownership to life than a Century 21 real estate professional.

"Our agents are at the heart of our business and their customers rely on them during critical times in their lives," said Bev Thorne, chief marketing officer, Century 21 Real Estate LLC, in a release. "These commercials celebrate our agents' dedication to customer service in a fun, creative way and will keep the Century 21 agent top-of-mind with consumers in advance of the spring home buying and selling season."