Retailer Apps May Be Winning The Showrooming War 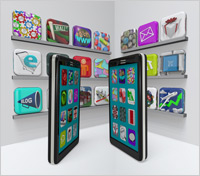 We have been banging the drum here for months that retailers need to fight the showrooming effect with a good offense. Don’t run away from the prospect that people comparison shop, price check and do product lookups in store aisles. Charge right into the phenomenon and offer a better in-store experience using mobile means. Make shoppers aware that your app exists and use it to get them into a digital channel so they are more likely to make that purchase from you on any number of channels.

There is some evidence from app analytics firm Flurry that retailers are succeeding in doing just that. In its look at time spent across over 1,8000 shopping apps on iOS and Android, retailer apps enjoyed the greatest growth (525%) in 2012 over 2011, compared to 247% for third-party price comparison apps, 228% for purchase assistants (i.e., ShopSavvy, ShopAdvisor), 178% for online marketplaces (eBay, Amazon) and 126% for daily deals apps. In fact, retail apps were a key driver of category growth, outpacing the 274% growth in shopping app use in the last year while all other types of apps grew below the category average rate.

There has been a substantial shift in overall time spent in the category, with retailers moving from a 15% share in 2011 to 27% in 2012, now leading all other app types. If we just use these shares as a rough indication of who is winning the war at brick-and-mortar (or at least regaining lost ground) it is the traditional brands. While price comparison and purchase assistant apps held their own in overall share of time spent, retailers gained at the expense of the Web-endemic third-party retailers like Amazon and eBay. Their subcategory of app declined from a 25% share in 2011 to a 20% share in 2012. Daily deals also saw a substantial decline from 20% to 13%, but that is another indication of an overall softening in that model.

This seems like much-needed good news for retailers -- signs that the investment and new seriousness they put into mobile experiences last year are paying back.

Personally, I think retailers need to encourage device use in the store. It is the best way to get that shopper into the digital channel where they can be remarketed, incentivized, and cultivated across Web, email, SMS and app. Free WiFi access points in-store are a perfect portal through which to start the digital relationship. The brand should be the in-store digital portal, providing connectivity and thus being the first one at the wireless door to get the shopper’s attention.

More to the point, the retailers need to get the metrics behind these efforts so they can calculate the ROI attached to getting a customer to download an app. This is the stuff that gets mobile marketing beyond last year’s gotta-have stage into this year’s model: here is the lifetime value of the customer your mobile app just saved.