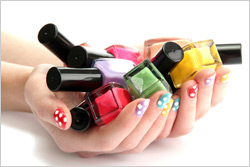 At least one segment of the consumer market did well during the recession and is still painting itself black: nail care. According to Chicago-based market research firm Mintel, the nail color and care market in the U.S. has grown by 72% since 2007, with sales estimated at $2.5 billion at the end of 2012. The firm says growth will continue through 2017 at a slower pace than previous years, with sales expected to reach just over $4 billion.

During the slump, women bought their own polish, eschewing pricey spas to varnish their keratogenous membranes in the privacy of their homes. With nobody around but the kids. Say what? Yes -- it's not what you'd think, but Mintel says it's so: women with kids use nail-care products more than those without.

“The beauty industry generally benefits when consumers have higher levels of disposable income; however, the nail care industry has experienced strong growth in recent years, despite the weak economy,” says Shannon Romanowski, beauty and personal care analyst at Mintel. She says nail polish is an affordable way to be fashionable. "The affordability of nail polish, combined with new products and colors, makes nail care a reasonable splurge for lower- to middle-income women.”

Expense is a big part of why women don't go to spas -- just over half of women say they would get their nails done more often at a salon, but it’s too expensive -- but so are health and time concerns: some 27% are concerned about health and safety issues at salons. Eighteen percent think getting their nails done in a salon simply takes too much time.

Not surprising is the fact that young women drive the nail care segment as well. The use of colored nail polish is highest among women between 18 and 24, per the firm, which says 85% of women in that age bracket use such products versus 71% of total female respondents. Same for nail art (33% vs. 16% of all respondents), artificial nails (23% vs. 14% of all respondents), and gel nail polish (14% vs. 10% of all respondents). The firm points out that product popularity among this cohort is about the vicissitudes of fashion trends, since younger people are more likely to experiment.

“Nail care users younger than 35 are significantly more likely than their older counterparts to view wearing nail polish as a way to express their personality and follow fashion trends," said Romanowski.