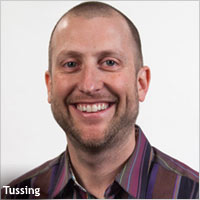 DDB Worldwide has hired agency veteran Chris Tussing to oversee the shop’s Reebok business. The client selected DDB as its global agency of record earlier this month. The business is shifting from Dentsu’s mcgarrybowen.

The marketer has an estimated annual global marketing budget of more than $300 million. In the U.S., Reebok, a unit of Adidas, spent about $65 million on ads in 2011, according to Kantar.

Tussing is relocating to New York to oversee the account. He had been based in Chicago, where he was with mcgarrybowen and managed that agency’s Anheuser-Busch InBev business.

The appointment marks a return to DDB for Tussing. Earlier in his career, he was a group account director at DDB West in San Francisco. Prior to mcgarrybowen, Tussing was managing director at Palm + Havas Chicago. Earlier, he was an account partner at Downtown Partners, another Chicago-based agency.

In addition to A-B InBev beers, such as Bud Light and Michelob, Tussing has led the advertising strategy for brands of various marketers, such as Kraft Foods, Clorox and Wrigley’s.

The Reebok assignment marks the return of DDB to the client’s roster. It was the sportswear and fitness company’s lead global agency for three years till early 2012. DDB will handle traditional advertising chores and develop digital and social media campaigns for the client, as well.

When DDB won the account a few weeks back, Amir Kassaei, Chief Creative Officer of DDB Worldwide, stated: "We have an opportunity to redefine the fitness category, and we're ready to create conversations [with consumers] that move the brand forward." DDB has begun work on a new brand campaign for Reebok that will launch in 2014.