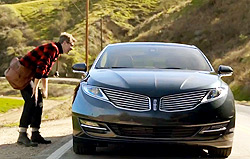 Lincoln Motor Co., which pulled up stakes and moved away -- both physically and symbolically -- from sibling Ford brand, has staked out a position in the Super Bowl. The program includes an ad created from Tweets, plus a separate ad for the new MKZ sedan. And there's a spokesperson relationship with three-time Super Bowl champion Emmitt Smith. Smith, with an assist from hip-hop superstar Rev Run, and actor Wil Wheaton, appears in a long-form version of the Tweet-driven ad at www.SteertheScript.com.

Jimmy Fallon also played a role when, in December, he hosted the initial pitch for tweets, asking his social-media fan base to write (in 140 characters) whacked-out road trip stories. The best of the contributions were chosen to make up the 30-second spot that runs in the third quarter. There's also a long-form, 90-second version on SteertheScript.com.

The winning tweets making up the ad creative include, "We drove passed an alpaca farm, a few of them were meandering on the highway and my sister screamed, 'It's the Alpacalypse!'"; and "Thousands of turtles crossing the road in FL. Dad stops, so did a huge scary Harley gang! Us and the gang played checkers!"

Tom Kowaleski, Lincoln communications chief, tells Marketing Daily that during the initial three-day “steering the script” social push, Lincoln got over 6,000 tweets. "However, in the month of December we garnered over 100 million media impressions from conversations in internet communities, passing along tweets and facts via Facebook and Twitter and other information channels," he says. "Therefore, the conversation grew as intended throughout the month. Now, in January, the conversation continued aided by some good strategically developed traditional media coverage." He says by this week Lincoln reached over 318 million impressions.

Kowaleski says it wasn't an easy decision for Lincoln to play in the big game. "What led the decision to do so and commit not inconsiderable resources was the opportunity to use the before-during-and after game period to create and develop a conversation about the new Lincoln."

The automaker announced the campaign as a part of an all-points bulletin about the brand's reinvention as Lincoln Motor, its new New York-based agency HudsonRouge, and new ad platform. "It was also the day the conversation started because Jimmy Fallon announced his participation that day to his massive social media audience and thus the conversation about Lincoln was off and running," he says.

In New Orleans, Thursday and Friday, Smith will do two days interviews with national and international media. "This is all important in this period of getting word out about the new brand because in such a transformation process it’s important to create a much larger conversation about the brand than just those that are your target customers," says Kowaleski. "Conversations move opinion and opinion shifts perceptions and beliefs and that’s exactly what we need to do with Lincoln. We’ve been fortunate that the Super Bowl window was right in the launch window."