BlackBerry Touts 10 With The NHL 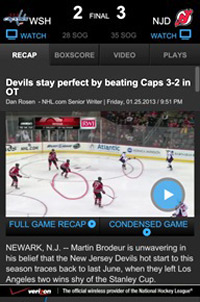 Counting on a brand resurrection with the new 10 platform, BlackBerry has renewed its sponsorship of National Hockey League media, including NHL Network and NHL.com as well as League broadcast partners. The company, formerly known as RIM, will put most of its media support against the NHL Trade Deadline Day on April 3.

Keith Wachtel, SVP of integrated sales and marketing at the NHL, tells Marketing Daily that the deal will give BlackBerry advertising rights on game broadcasts, and big boards in game venues via the NHL's North American broadcast partners, though "players will not be involved in this specific campaign." Wachtel says BlackBerry won't actually have products at games, but the user experience will be showcased during broadcasts, online and through a NHL GameCenter app for the BlackBerry 10.

Aligning with BlackBerry's user interface, the NHL GameCenter has a “peek” capability that lets the user swipe one screen over to reveal additional content underneath and iconography at the bottom of the screen with quick links to additional content.

"We continue to develop new platforms for BlackBerry to take advantage of,” says Wachtel. “Last year was League events as well as the EA Cover Vote." He adds that while BlackBerry is the preferred hardware partner for the NHL, "Given the importance of the category to both Verizon and Bell, our wireless partners have the ability to tie in multiple handsets understanding our preference during this promotion is BlackBerry."