Q&A: Will Any Brands Show Up Naked At Super Bowl? 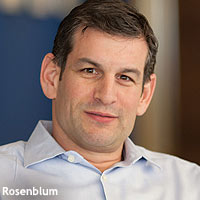 Ever since Jeff Rosenblum, a co-founder of Questus, started showing marketers “The Naked Brand,” a documentary about advertising he made with Sherng-Lee Huang, he’s become accustomed to fielding questions about what is and isn’t breakthrough. Marketing Daily caught up with him before the Big Game, to ask whether he expects any advertising renegades to show up on Super Bowl Sunday.

Q: First, why did you decide to make a documentary about marketing?

A: We really didn’t set out to. The idea was that we’d make this kind of clinical video to show clients, to illustrate how thoroughly the world of advertising has been disrupted. Everyone in the world understands that, except for the people who work in advertising.

It’s an industry ready for a revolution. And as we started filming, more and more people wanted to be a part of it.

Q: Do you have a favorite moment in the film?

A: Yes. It’s when B. Bonin Bough, who worked on the Pepsi Refresh Project, says: “We had this new medium that could change the world. And then we created … display advertising.”

Q: So the film’s premise is that marketers are increasingly recognizing that they have to think bigger, more openly, more honestly. Yet the film covers a pretty predictable set of brands: Zappos, Patagonia, Unilever. Why aren’t there more?

A: True. I think we are at a tipping point. I believe we will see more and more brands come over to this new way of thinking.

Q: Couldn’t one argue that brands are actually stepping backward, not moving forward? Take Pepsi, which at one point ditched the Super Bowl and its predictable formula of using pop stars to sell soda, and created Pepsi Refresh. This year? It’s all about Beyoncé and the Super Bowl. Is that a backlash?

A: I don’t think so. No campaign lasts forever. And I think Pepsi Refresh was successful -- more people voted in it than for Barack Obama. That changed the way I saw the brand, as a consumer. And I have to believe it changed the way many people saw the brand. So it was a massive success, but that doesn’t preclude them from coming back to the Super Bowl.

Q: Some of the people in your film talk about using their brands to change the world out of altruism, a premise that today’s cynical consumers clearly think is baloney. Why position it that way?

A: I think consumers expect transparency. And if you want to be a world-class brand today, you’ve got to focus on your behavior. That doesn’t necessarily mean a green message -- we include Virgin Atlantic in the film, for example, which is more about the commitment to please customers. But here’s what we know, based on examples like Nike and Apple: If you have something bad in your behavior today, you will be outed. There is nothing you can do with marketing to protect you from that. So it is important to talk about what you’re trying to do better. I think Patagonia is an amazing example of that level of honesty.

Q: Alex Bogusky plays a big role in your film, talking about his projects. Care to comment on some of the heat he’s drawn?

A: Well, he’s sufficiently successful to become a target. He’s got this hippie DNA and wants to save the environment, and also has this ability to grow brands. I’ll be emailing him, and he’ll go dark, and I’ll find out he’s been out on a pontoon boat in the Arctic or something. Is he perfect? No. You could say the Soda Stream thing is still promoting soda, which leads to obesity. So he has flaws. But I admire him, and the way he lives his life.

Q: If so many marketers are on the cusp of understanding this new way to connect with consumers, will we see any of it on the Super Bowl?

A: No -- I don't expect any breakthroughs, in the realm of brands entering into transparency. But I’m a huge sports fan, and it’s also fascinating to me to watch people watch the game. They get drunk. They get distracted. They say they are watching the ads, but often can’t hear them over the background noise. I also think it’s incredible that the buzz around the advertising creates these enormous bumps in awareness building up to Sunday, and then by Monday or Tuesday -- boom. It’s all gone.

Is it worth it? It just seems like a crazy concept to invest so much in these ads. Yes, you get a profound impact. But it lasts such a short time.