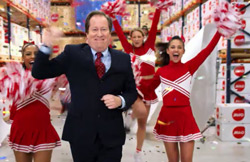 Following the Super Bowl, Jell-O ran a 30-second spot announcing that it will throw an event handing out free samples of Jell-O Pudding in San Francisco on Feb. 5.

The spot’s introducer says: "Congratulations, San Francisco -- you might not be getting a trophy, but you will be getting a cup ... of Jell-O Pudding. Because nothing masks the bitter taste of defeat like the sweet taste of Jell-O."

The “Pudding Surprise” event – featuring an appearance by Ronnie Lott, the former San Francisco 49ers star defensive who was inducted into the Pro Football Hall of Fame in 2000 – will take place at 12:30 PM PST at Broadway and Columbus Avenue.

The event and the spot (which was created by CP+B) are an extension of Jell-O Pudding’s new “Fun Things Up” campaign, which kicked off with a Mayan apocalypse spoof ad during December.

The campaign’s site (FunThingsUp.com) is offering the locations and times of additional “Pudding Drop” events to be held around San Francisco.

The site is also offering a coupon for the pudding -- and a downloadable browser plug-in (Chrome extension) that enables 49ers’ fans to block all words and images relating to the Baltimore Ravens, so as to avoid the pain of experiencing Raven fans’ “gloating.”

“A successful season is reason enough to celebrate, because even when you lose some, you win some,” said Greg Gallagher, senior brand manager for Jello-O at Kraft Foods Group, Inc. "Jell-O has always been about ‘funning things up,’ and we want a put a smile on the town that has its spirits down.”

Obviously, Jell-O must have been prepared to run the spot-version creative that reflected the outcome of the (very close, as it turned out) game.