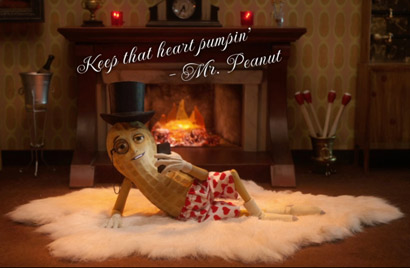 That naughty Mr. Peanut is at it again.

This time, the iconic Planters brand character is starring in three humorously sexy Valentine’s Day video e-cards designed for fans to share with their honeys.

All of the video e-cards -- available Feb. 1 through Feb. 28 through a “Keep That Heart Pumping” app on Mr. Peanut’s Facebook page -- are personalized with the sender’s name. One gives the option of pulling a photo of the recipient into the video, and another posts a message from Mr. Peanut on the recipient’s Facebook wall.

Those who create and send a card -- as well as recipients -- are rewarded with a $1 coupon for Planters nuts.

Two of the videos show Mr. Peanut reclining in front of a fireplace (in one, he’s garbed in heart-print briefs, reaching out to his “sugar” via a new camera phone; in the other, he’s embracing a picture frame, where the recipient’s photo can be featured). In the third, Mr. P “bares it all.” Well, actually, his lower peanut region is covered by a big, red bow.

All three videos feature sexy background music with vocals by a deep-voiced male singer (reminiscent of a certain now-deceased disco/soul star, although Planters reports that the singer is “in-house talent”).

That message alludes not just to the cutely provocative Valentine’s Day video content, but also to an accompanying theme of the campaign, created by TBWA/Being.

He also points out that the Food and Drug Administration allows peanuts (among other nut products) to make a qualified health claim in their advertising/packaging noting that scientific evidence suggests (but does not prove) that eating 1.5 ounces a day of most nuts, as part of a diet low in saturated fat and cholesterol, may reduce the risk of heart disease.

Planters is confident that the more than 500,000 existing Mr. Peanut Facebook-page fans will drive significant sharing of the video e-cards, says Padgett.

However, to prime the pump (so to speak), Planters is also promoting the e-cards and accompanying coupon offer via targeted ads on Facebook and other online channels. The ads drive consumers to the “Get Your Heart Pumping” app.