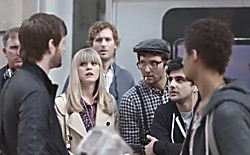 Editor's Note: This week, Marketing Daily brings you exclusive coverage of the Brand Keys 2013 Customer Loyalty Engagement Index (CLEI). Each day, expect a full report on key product/services categories from among the 54 surveyed for this year’s study, including automotive, electronics, retail and technology. This second installment covers electronics, telecommunications and entertainment.

Move over, Apple -- there’s a new brand dominating loyalty in the world of consumer electronics.

Samsung, which has scored well in previous years, is now the leader in most of the categories in which it competes (as measured by Brand Keys’ 2013 Consumer Loyalty Engagement Index). The Korean electronics giant comes out on top of the laptop computer (tied with Apple), flat-screen TV and smartphone categories, and was number two among home printers and tablets.

“This is a big turnaround,” Robert Passikoff, Brand Keys founder and president, tells Marketing Daily. “Samsung was always strong, but this is a bit of a switchover. It was a surprise. I guess it shouldn’t have been. I’ve been watching their advertising, and I thought it was really good.”

Indeed, particularly in the mobile world, Samsung’s advertising has been attention-getting for all the right reasons. A campaign that ran last year, tagged “The Next Big Thing,” poked fun at Apple acolytes who lined up in advance of a new device’s release despite having fewer features than Samsung’s Galaxy Series. Last fall, as Apple was introducing the iPhone 5, one of the commercials featured a Samsung user holding a spot in line for his Baby Boomer parents. That message has particular resonance as Samsung positions itself as the “anti-Apple,” Passikoff says.

“I think they’re making real inroads,” he says. “I think [some of it] is the technology. But a lot of it has to do with how they’re positioning themselves in the marketplace, [particularly for] the younger marketplace.”

Even more bad news for Apple, the company that basically invented the modern tablet category isn’t the leader among tablets anymore, either. That category is led by Amazon’s Kindle Fire, indicating that some consumers may be replacing their simple e-readers with a device whose primary purpose is still an e-reader, but has some tablet features, at a price lower than an iPad.

Yet Apple acolytes needn’t fret. The brand is still tops among laptops (tied with Samsung) and is number two in the smartphone and tablet categories. Apple also ranks number three among e-readers, although the iPad is not primarily designed for that use.

One brand that may want to start worrying, however, is Sony. The brand that once dominated consumer electronics is now starting to wither. Sony’s Vaio laptop is a number three (behind leaders Apple and Samsung and Asus and Toshiba, which tied for second). Its flat-screen televisions were third (behind Samsung and Vizio) and its e-reader was fifth.

Sony may be hurt by the overall contraction among the consumer electronics categories. With so many devices pulling double duty (phones taking pictures, for instance), many categories previously tracked by Brand Keys were dropped this year. Sony still has a presence in many of these categories, (feature phones, Blu-ray players, digital point-and-shoot cameras and digital SLR cameras), although perhaps little brand loyalty, Passikoff says.

“Even though the categories are still viable for brands, you’ve got brands within the category that are starting to lose their ‘brand-ness,’” he says. “I think Sony’s one of them.”

Among telecommunications companies, AT&T topped the list, although it’s hard for any company to meet the “extraordinarily high” expectations consumers have for their wireless providers, Passikoff notes.

“A lot of people bitch and moan about AT&T, but if you look at their retention rates, they have the highest levels in the category,” he says. “The fact is, when it comes to real numbers that [we use to] say what are people doing, they’re sticking with AT&T.”