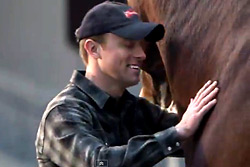 The final results are in, and Budweiser's "Brotherhood" ad featuring its iconic Clydesdales was indeed the most effective ad of the Super Bowl, according to Ace Metrix.

The 60-second spot achieved an Ace Score of 665. Mountain View, Calif.-based Ace Metrix measures 500 consumers who watch and score each ad across a variety of standardized metrics.

In addition to the ubiquitous Clydesdale spot, Anheuser-Busch debuted three-and-a-half minutes of new ad creative, including spots for Anheuser-Busch's two newest brands, Budweiser Black Crown and Beck's Sapphire -- both of which made their national TV debut.

Bud Light, the official beer sponsor of the NFL, premiered two 60-second ads, "Journey" and "Lucky Chair." The ads are the culmination of the brand's successful "Superstitious" campaign, which portrays the traditions and rituals NFL fans employ to help their teams win. Both ads are set in New Orleans, tying the creative closely to the Super Bowl. The creative agency for these spots is Translation.

The "Brotherhood" spot chronicles the bond a Clydesdale foal shares with his trainer. It was partially shot at Warm Springs Ranch, a 300-plus acre farm near Boonville, Mo., home to many of the Clydesdales.

This is the Clydesdale's 23rd Super Bowl spot since first appearing in a big game spot in 1986.

Beck's Sapphire, which debuted on New Year's Eve, made its Super Bowl advertising debut with a 30-second ad, "Serenade."  The ad celebrates Beck's Sapphire's sleek, one-of-a-kind black bottle, and features a surprise admirer that is mesmerized by its beauty. The creative agency for Beck's Sapphire's ad is Mother.