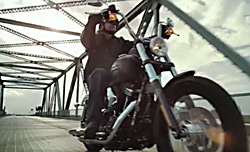 Kid Rock rides Harley-Davidson, and now it's vice versa via a partnership that puts the Milwaukee-based motorcycle maker on the road behind the star's national tour.

Harley is title sponsor of Kid Rock's "Rebel Soul" tour, which kicked off Feb. 2 in Kansas City. The company is putting products and experiences on the ground at each of the 60 planned tour stops, and themed "Rebel Soul" apparel at concerts and dealerships. While Harley-Davidson won't go as far as having its logo behind the pop music polymath's performances, Rock is -- at each concert -- riding a Street Bob model onto the stage. And at the final stop on the tour, on Aug. 31, Kid Rock will perform at Harley-Davidson's 110th anniversary concert in Milwaukee.

There are several activations around the deal: there's a sweepstakes where, at each concert, someone has a chance to join the band on stage for a song, via registration at a Harley-Davidson Display Area at each venue; a national promotion dangles a factory-customized Harley motorcycle and the opportunity to play onstage with Rock at the 110th Anniversary show in Milwaukee (for that you have to go to www.h-d.com/kidrock. The winner gets to travel, with VIP treatment, to the 110th anniversary, a meet-and-greet, and a photo shoot with Rock; and there's a co-branded line of apparel bearing the Kid Rock concert theme, "I can't hear you over the rumble of my freedom."

Scott Beck, Harley-Davidson general manager, North America Marketing Operations, says that although the brand has had a lot of celebrity partnerships over the years, they have been incidental -- celebrities who happen to ride the brand and extoll its virtues. "It has been mostly organic and fed through love and appreciation of of brand. We saw a larger opportunity here. Harley-Davidson fits with Kid Rock's brand, so we saw we could take it up a notch."

Beck also says the deal came about easily because the company had a relationship with Rock already, and has had its motorcycles in his videos in the past. "We have had a partnership with him for a long time," he says, adding that the other appeal for the artist is that he has crossover appeal. "He blends country, hip hop and rock ’n’ roll, and our ownership base also crosses the entire spectrum." The timing is good because Rock has an album coming out.

Apparel is also a big part of Harley-Davidson marketing, notes Beck. "T-shirts are huge for us, so it makes sense to align something that we are good at anyway." In addition to selling these at concert venues (and at retail) Harley will have experiential programs like its "Jump Start," basically a stationary motorcycle that runs on a dyno and lets "riders" get the feel of riding and spin through gears. "We will also have bikes on display."