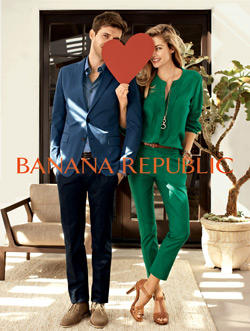 Banana Republic is launching its new Spring clothing line with a global marketing campaign called “Love,” and is even trying to translate the ads into real-life, sponsoring in-store Valentine’s Day events with Match.com. The meet-and greet mixers are scheduled to happen after hours in such key markets as New York, Los Angeles, San Francisco and Chicago, and the company says it expects them to shore up affinity for both the clothing company and the matchmaker.

Banana Republic fans can participate, too, by sharing their favorite photos of hearts using social media, for the chance to be included in a Valentine's Day album posted on Facebook.

The Love print campaign includes models in Banana Republic looks that celebrate color, tailoring and denim, which it says are the season’s major trends, and is running in Vogue, Elle, Marie Claire, Vanity Fair, Details, GQ and other magazines, and will begin appearing in store windows starting Feb. 14.

Separately, the chain, owned by San Francisco-based Gap, says it is introducing new versions of its Classic, W and M fragrances, “which have each been renewed to capture the modern style of the Banana Republic customer.”

The company says the relaunch reflects its more sophisticated tailoring, as well as customer demand for it to bring back the M fragrance, introduced in 1995. “Classic and W have consistently been our strongest performing fragrances and we are delighted to reintroduce M to complete our iconic fragrance fleet,” the company says in its release.