US Airways Rises To The Top in Customer Loyalty 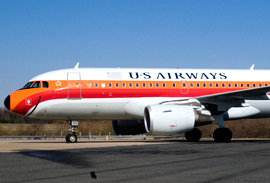 Editor's Note: This week, Marketing Daily brings you exclusive coverage of the Brand Keys 2013 Customer Loyalty Engagement Index. Each day, expect a full report on key product/services categories from among the 54 surveyed for this year’s study, including automotive, electronics, retail and technology. This installment focuses on highlights from travel marketers.

US Airways took a giant leap to the top of the heap in the 17th annual Brand Keys Customer Loyalty Engagement Index (CLEI).  The airline which only placed fifth last year (tied with JetBlue) beat out last year’s top three finishers: Continental, Southwest and Delta.

Continental has a fail-proof excuse for being knocked from the top – the airline brand no longer exists since it was merged with United.

“US Airways, basically, didn't do anything wrong, which in the airline industry gave them a real lead,” said Robert Passikoff, founder and president of Brand Keys, Inc. “And their passengers give them high marks for in-flight services.”

JetBlue had been doing great until they decided it was okay for planes to sit on the tarmac for seven hours and then cancel numerous flights, he said.

“There's just so much slack that all-you-can-eat sweet and salty snacks can make up for,” Passikoff said. “And this year they fixed it, so moved up the list. But you don't jump back up to the top of the list just like that. Engagement and loyalty are earned.”

Continental's merger with United was not seamless, he says. Delta merged with Northwest and did it a little better than Continental and United, he adds. American has done everything wrong for a while, in and out of Chapter 11, strikes and slowdowns -- all of which affected the way passengers experience the brand.

The top hotels were InterContinental in the luxury category, Hilton in the upcale segment, Best Western in the midscale and Days Inn in the economy arena.

“There were no real surprises in the hotel category brand rankings,” Passikoff said. “But there were in the category itself: Expectations are very high at all category drivers, with the biggest related to brand reputation and amenities. Part of the syndrome is that guests expect more and more in terms of added value and amenities, even at the economy level.”