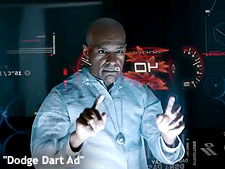 It's still kind of hard to believe: a few years ago, Chrysler Group was like Jimmy Stewart on that bridge about to take a final swim in the frozen waters below. For Chrysler, the angel offering another chance to get it right was the Italian automaker Fiat Group S.P.A. If Stewart realized, finally, that his was a wonderful life, maybe the people at Chrysler Group are feeling that, too.

The company's brands have been on an upswing for the past three years, and every product launch -- Durango, Grand Cherokee, Chrysler 200 and 300, Dart, Fiat 500 -- has been successful. And although the group has a small budget, it has done as well or better than the bigger companies in grabbing share of voice. To get the recipe for success, Marketing Daily corralled Chrysler Group, LLC CMO Olivier Francois, and 20-year Chrysler veteran and now head of the Fiat brand in North America Tim Kuniskis. Here's Part One of a two-parter.

Q: Dodge has focused on product, most recently with "New Rules" for Dart. Should there be more pure brand programs for the division?

Francois: I think the Dart campaign, the only tier-one campaign we did last year for Dodge, is very much about brand positioning. The voice, music, the way images are cut -- it connects well with a younger group. It's very strong and describes very well what the Dodge brand is.

Q: What do you think of full-line ads to establish product and brand consistency and personality?

Francois: It's extremely confusing, and I prefer to sell a product through its brand, not a brand through its products. There are just better ways to define what a brand stands for, what its DNA is, its roots, its values, history, and people than just a display of cars. Jeep Compass is an example: by showing Muhammad Ali with his daughter in that campaign, we really established the idea of bloodline. I think we barely showed the car. It was about lineage. "Guts, Glory, Ram" is another example. Just displaying as many nameplates as the brand has to sell? A tier-two commercial, maybe.

Francois: It's been a combination: for sure, quality, technology, and maybe design lead the whole thing. Plus we have been lucky with press and third-party endorsements, and for sure, marketing -- which got us noticed although we don't have the share-of-voice that bigger groups have.

Q: It's a tall order to change perception, though.

Kuniskis: Well, this is the best product we have ever had, and it's the fastest we have ever done product launches. We had 16 refreshes in a year-and-a-half; it's been at an amazing speed. We had never had a car in the D segment, which is the biggest segment in the industry, and now we have Avenger and 200 setting records, which is a huge help to volume, year-over-year. Then you add new ownership, a comeback story, and the best advertising we have had in the 20 years I've been here. [Product and marketing] are coming together perfectly. And there's a natural progression from third-party endorsements to showroom traffic: they like it, and they buy it.

Q: Where are buyers coming from?

Kuniskis: Depends on the brand. If it's Fiat, they're all brand new. Our biggest conquests are Honda and Toyota, which weren't shopping Chrysler, Jeep, Dodge or Ram before, so it's pure incremental volume to the Chrysler group: 55,000 units this year are pure incremental -- sales that we would have never seen before.

Q: When you look at marketing allocation across the brands, are you putting more attention on one brand or staggering speed?

Francois: I'm handling 10 brands all over the world [in the U.S., it's five], so you need some rational allocation. Margin is important: the contribution of this or that car to your profitability, the gross market share you are expecting. If expectation is low, I'm not going to invest too much. If it's a new car -- a new nameplate -- with low awareness, but good contribution margin, with high gross expectation, that's where the money is going to go.

When we made a spinoff of Ram to create a separate brand, Ram got a lot of attention and resources in the beginning. Now a bit less. Then Jeep was very important as Grand Cherokee was the launch of the new Chrysler Group, and we wanted to grow by 100% on the Jeep brand. Then Chrysler was challenging, and we really needed the "Imported From Detroit" umbrella because it's a smaller brand, so maybe more difficult to communicate on each and every different nameplate.