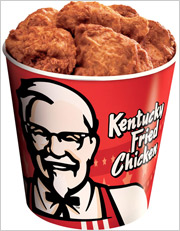 As YUM Brands continues its focus on China and emerging markets, it’s ramping up advertising in France and Germany after expansion in both. With some 100 KFC locations in Germany, the company said it can now “justify” national TV advertising for the first time there. In France, where the company has some 150 KFCs, plans call for expanding the TV schedule from 20 weeks to 32 this year.

When national advertising began in France, sales increased more than 10%, said YUM President Richard Carucci on an earnings call. He did say the company is aware that “we have a long way to go because McDonald’s has over 2,500 restaurants in these two countries.”

At YUM Brands, which operates the KFC, Pizza Hut and Taco Bell brands, China remains a focus, although the company has experienced some significant trouble recently, due to health concerns with its KFC poultry supply, which will hurt results this year.

In the U.S., YUM said its three main brands -- which include Taco Bell -- all experienced same-store sales growth in 2012. (The total for the company was 5%). A 60-second Taco Bell spot ran in Sunday’s Super Bowl and the company has worked with franchisees to shift some local advertising resources to the national level, which Carucci said should result in a “more efficient” investment.

“While the (U.S.) economy is certainly not robust, it is strong enough to control our own destiny,” Carucci said. “We believe that the U.S. is set up for success in 2013 because Taco Bell has momentum, because new units are now working in our favor, and because we have meaningful innovation plans at all three of our brands.”

(Pizza Hut is launching “Sliders,” which will be sold in groups of three and nine.)

With China, the company believes it will take time to win back customer confidence, and it will engage in some marketing efforts, but they may be relatively modest. There is a belief that while YUM has a large budget in China, spending heavily may not be nearly as effective as just waiting things out.