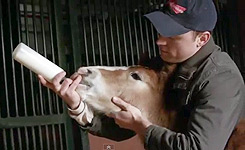 The Super Bowl is 11 minutes long. But the ads! They have just started. Here's Nielsen's take on most remembered, and most liked.

Doritos was this year’s creative MVP for the second year running, with the "Goat 4 Sale" ad, the sixth time the company has crowd-sourced creative. The ad was the most liked and most memorable, per the firm, which says eight of the top 10 most memorable ads also placed among the top 10 most liked, which include Taco Bell, Tide, Ram, the NFL and America’s Milk Processors.

Taco Bell’s "Goodnight Mr. Goldblatt" was the second most-memorable and third most-liked commercial in Nielsen's ranking. It was also the most tweeted-about ad of the game, getting 215,000 tweets during the game, per SocialGuide. GoDaddy got the most conversation for its makeout scene.

Sentiment: Budweiser, Ram and the NFL took the Kleenex sector. Bud stole a trick from "War Horse" kinda: Trainer raises foal, they part when foal grows up, moves to L.A. to pursue an acting career, scores big with a Budweiser Super Bowl commercial as a Clydesdale, sends residuals back to trainer who uses windfall to buy a new Ram. Horse and trainer reunite after a few years apart, and talk about Old Times while horse ignores calls from agent.

Speaking of Ram, the Chrysler Group truck brand scored big with a brilliant turn using none other than a read broadcast from Paul Harvey extolling the virtues of farming. It's likely that pickup truck owners may be among those who actually cherish the memory of Harvey, especially with the current crop of radio wackos, screamers and bloviators. The NFL thanked fans by sending their favorite NFL players to their houses to surprise them.