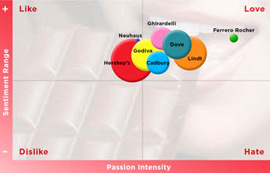 Turns out that Hershey’s has been getting the most social buzz, but Ferrero Rocher’s chocolate hazelnut products are most “loved.”

All eight brands fell into the “like” or “love” quadrants (as opposed to the “dislike” or “hate” quadrants), based on NetBase’s Brand Passion Index analytics.

Hershey's generated 30% of the overall chatter for the eight chocolate brands, and saw 84% positive chatter, but had the lowest “Passion Intensity” score (45 out of a possible 100) and the second-lowest “Net Sentiment” score (68). While online consumers chat in high volumes about Hershey’s many products, some complain about overly sweet taste or aroma, or express the sentiment that Hershey’s products will “do in a pinch.”

Ferrero Rocher generated just 1.3% of the overall buzz among the brands, but showed the highest consumer social “love,” with a perfect Passion Intensity score of 100. It also tied with Ghirardelli for highest Net Sentiment score (87). Consumers “raved” about the brand’s classic, gold-wrapped, hazelnut-flavored chocolates, calling them the “perfect gift” to give and receive, according to NetBase.