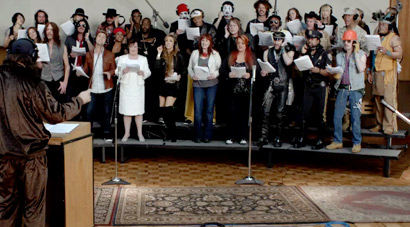 Susan Boyle and heavy metal rockers in the same video?

The more than two-minute-long video that’s the kickoff centerpiece of Miracle Whip’s latest campaign -- “The Year of a Million Mouths” -- features a remarkably eclectic lineup of musicians.

In the video -- a takeoff on music-industry concert benefits (“We Are the World,” Band Aid, etc.) -- the singers/musicians join together to deliver an original “anthem” that’s a plea to consumers to try the much-misunderstood alternative to mayonnaise, rather than unfairly “prejudge” it.

The YouTube-hosted video will be embedded in Miracle Whip’s Facebook page -- the hub of the campaign -- on Sunday, Feb. 10, timed to coincide with the annual broadcast of the Grammy Awards that evening.

The campaign, to run throughout 2013, is an evolution of Miracle Whip’s 2012 “Keep An Open Mouth” campaign. That campaign included videos (starring Judd, actor Jeffrey Tambor and comedian Michael Ian Black), humorous TV ads and other elements that also drove home the “try it before you decide” message. That was supported with heavy sampling (Miracle Whip distributed more than 1 million samples during the 2011-2011 time frame).

The anthem used in the new centerpiece video is titled “Keep an Open Mouth,” and that phrase is frequently integrated in other elements of the new creative, again from Mcgarrybowen, Chicago.

This time, however, the efforts key off Miracle Whip asking consumers to “fight the prejudgment of Miracle Whip” by helping the brand achieve its mission of getting the spread into “a million mouths” this year.

Entertaining, While Drawing a Parallel

Why bring these artists together for a video?

Kraft Foods -- which has “stabilized” the brand since it began reinvesting in Miracle Whip’s marketing and advertising starting in 2009 -- wants to keep building on the momentum realized through the 2012 campaign, in particular, says Scott Glenn, senior associate brand manager for Miracle Whip.

Like the “Keep An Open Mouth” campaign, the new one is more focused on behavioral than demographic audience targets: “People who enjoy a flavorful experience, and seek to be individuals in all they do,” Glenn explains. The continuing, “authentic” core message is: “Not everyone’s going to like Miracle Whip, but firsthand experience trumps second-hand information. Be the kind of person who makes your own decisions,” he sums up.

The marketing challenge is that sandwich spreads are “not a particularly high-involvement category,” so Miracle Whip needed to find a way to “elevate the conversation” to being about more than just sandwich spreads, Glenn says.

Miracle Whip’s research showed that music is a “passion point” for its fans and its prime target prospects, he reports. So the video and other musical-artist elements of the new campaign were designed to engage and entertain, while also conveying a point: There’s a parallel between how people tend to make passionate but sometimes misinformed or little-informed judgments or assumptions about certain music genres and performers, and how many people tend to “prejudge” Miracle Whip.

Hence, the artists chosen for the campaign are ones that evoke passionate reactions because of their styles or genres, or have been misunderstood or underestimated. Boyle -- whose debut TV performance famously astonished “Britain’s Got Talent” judges who were expecting the worst based on her frumpy appearance -- is a prime example, notes Glenn.

All elements in the campaign drive consumers to Facebook to “get your taste and be counted” -- the “taste” being an online $1 coupon that is available there, while supplies last.

Prior to the “anthem” video’s debut, Miracle Whip has been doing teaser promotions on Facebook and Twitter (all campaign elements also mention the hashtag #KAOM, for “Keep An Open Mouth”).

The brand created two 15-second teaser videos -- one a spot featuring Judd telling viewers not to “prejudge” her hair (those who click on her hair are taken to Facebook); and one a condensed version of the “anthem” spot, which is also being used in rich-media ads and as a pre-roll.

While the campaign will employ some media typically used by food brands, it will also be using music and entertainment media. In fact, to drive traffic to the “anthem” video and Facebook site, Miracle Whip’s team employed “a lot of targeting” to incorporate a number of music and entertainment sites for its rich-media banner and pre-roll ads -- and expects to reach about half of the total Grammys audience through these efforts, according to Glenn. (The campaign does not include a Grammys broadcast ad, or any television ads.)

Similarly, the campaign’s print element includes women’s lifestyle, parenting and food magazines (such as Family Circle, Glamour, Redbook and Kraft Food & Family) , but also a significant lineup of music and entertainment titles, including Rolling Stone, Filter, People, US Weekly, Entertainment Weekly, Star and In Touch Weekly.  (Several sports and fashion magazines -- including GQ -- are also in the mix.) Where possible, Miracle Whip will also appear in the magazines’ digital tablet editions.

While the media mix is designed in part to reach Gen Y, there’s no “laser focus” on that demographic, reports Glenn.