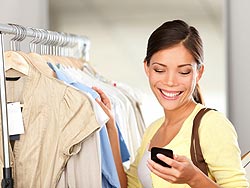 The practice of examining merchandise in a traditional brick-and-mortar store only to find the item online via a mobile phone (a.k.a. showrooming) may present more of an opportunity than a threat to traditional retailers.

According to research from analytics firm ForeSee, which surveyed more than 6,200 consumers during the holiday shopping season, about two-thirds (62%) of customers who used their phones in a retail store used their devices to access that store’s Web site or app, while only 37% used them to access a competitor’s site or app.

“You can either look at is as a negative, or it’s an opportunity,” Larry Freed, CEO of ForeSee, tells Marketing Daily. “The opportunity is that people are coming into your store. If you’re going to use mobile as a companion channel, you want them to come to your site.”

To capitalize on the opportunity, retailers should start looking at mobile devices as “companion tools” rather than as gateways to another sales channel, Freed says. That means optimizing a mobile Web site to provide more information about the products already in stores, making it easy to find products both in-store and through a mobile Web site and even promoting their mobile sites as information repositories within the traditional retail environment.

“For most consumers, the number one driver about where they purchase is not price. They’re looking for a great experience overall, which includes price, availability and reputation,” Freed says. “There’s a lot of advantages that stores still have. If you get [consumers] in your store, you’ve got a fighting chance.”

For the survey, ForeSee also analyzed customer satisfaction rates among mobile shopping outlets. Amazon ranked the highest, with an index score of 85 (on a 100-point scale), followed by Apple (83), QVC (83), NewEgg (80) and Victoria’s Secret (80). Several retailers made notable improvements over last year’s scores, such as Target (+5), Victoria’s Secret (+5) and Barnes & Noble (+4), indicating that many retailers are beginning to understand how to use mobile.

“Many saw an increase in their index over last year, which is very, very good,” Freed says. “It’s about knowing where you are and then continually improving that experience, and really understanding how consumers are using it.”