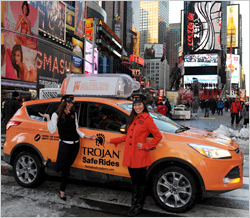 Trojan is marking Condom Awareness Week with an innovative promotion.

The company is using game show-style taxi trips in New York City and a history of condoms documentary to promote the brand.

The rubber is literally meeting the road -- pun intended -- as the condom makers deploys a fleet of Trojan Safe Ride taxis to drive home the facts about condoms. Americans are invited to get in and gauge their sexual health IQ by participating in a condom trivia game while en route to their destination.

On Feb. 14-15  from 7 p.m. to 2 a.m., people will have the opportunity to receive a complimentary "safe ride" in designated zones within New York City. Passengers who hail the Trojan Safe Rides will be asked to challenge themselves during this interactive trivia experience, aimed at providing passengers with accurate information about sexual health and condom usage. All passengers have the chance to win prizes.

Brand ambassadors will be on foot in popular nightlife neighborhoods in New York City distributing information on how people can flag down a Trojan Safe Ride. The trivia experience begins as passengers enter the taxi and ends when the driver arrives at the passenger's destination, within the designated zones. Passengers who answer five or more questions correctly receive a Trojan prize pack. Those who answer all of the questions correctly win a year's supply of Trojan condoms.

The brand is promoting the initiative at Facebook.com/TrojanCondoms

"While using a condom is easy, it is important that people have the facts to ensure they are using them consistently and correctly, and that we continue to dispel the myths associated with condom usage," said Bruce Weiss, vice president of marketing for Trojan brand condoms in a release.

The initiative coincides with the launch of the Condomology web site, a consumer-friendly sexual health resource developed in partnership with the American Sexual Health Association. Consumers can log on to view a new short film documenting the historical journey titled "The History of Condoms."

Narrated by some of the most renowned sexual health experts and historians, the documentary takes a look at the evolution of the condom, from its beginnings in ancient Egypt to the innovations of present day. Experts from the Center for Sexual Health Promotion at Indiana University, Museum of Sex, Dittrick Medical History Center, ASHA and Trojan take a look at how condoms have impacted American history.