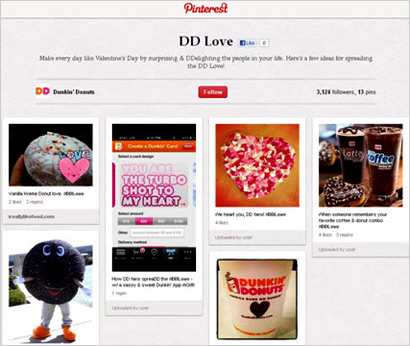 In recent years, Valentine’s Day has become one of the most important holidays of the year for Dunkin’ Donuts.

In 2011, the introduction of heart-shaped donuts was the most successful donut launch in Dunkin’s history, according to the company. Not surprising, then, that the chain is doing it up for V-Day.

Menu-wise, it has added another variety of heart-shaped donuts this year (Brownie Batter). It’s also offering a lineup of dark chocolate mocha beverages around the holiday.

And the QSR is leveraging social media harder than ever for V-Day, with efforts including a V-Day Twitter sweepstakes being launched today.

Dunkin’ has also created a “DD Love” Pinterest board where fans can share ideas for small ways to surprise and delight the special people in their lives leading up to V-Day.

Finally, Dunkin’ has launched new Valentine’s Day virtual gift cards that can be sent via email, text or Facebook through the mGift feature on the Dunkin’ mobile app.