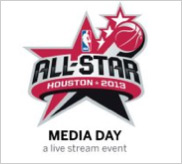 The NBA is rolling out some major digital participation programs for the All-Stars game this weekend, and American Express, the "Official Credit Card Partner of the NBA," is the major sponsor. The long roster of programs on NBA.com properties give people who aren't in Houston access to the game as well as the preceding Media Day events.

It also gives American Express customers exclusive programs. The effort, with NBA Digital, includes "NBA All-Star Media Day Streaming Live Courtesy of American Express" on Feb. 15, which the NBA says is the first time fans will be able to watch the media availability online. The way it works is that in the days leading up to NBA All-Star Media Day, people can send in queries via Twitter at #AmexAllStar.

Another program is "Unlock Your All-Star Experience," also at www.nba.com/amexallstar, which includes content from highlight videos as well as access for cardmembers to a line of All-Star apparel. Another element, called "Choose Your Cam," allows viewers to have a certain amount of control over viewing by switching between four cameras -- each featuring a different player taking questions live, per the NBA.

To get discounts on apparel, American Express cardmembers have to sync their cards with their Facebook, Foursquare or Twitter account. The company says doing so unlocks a one-time $10 statement credit if customers spend of $30 or more at www.NBAStore.com.

American Express is also sponsoring a video channel via TNT Overtime running feeds during TNT’s live coverage of NBA All-Star, per the NBA. Viewers will be able to access HD alternative camera angles, in TNT’s on-air presentation at the TNT Overtime platform.

Digital participants can also see how teams are tracking through a Social Volume element that graph key plays and each team’s social volume in real-time, according to the Association, and viewers can review key plays during the game via in-game highlights, track which players are on the court, and get stats to compare game performance with a player’s season averages.