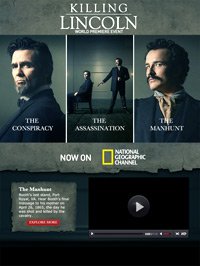 To help promote the premiere of its first original docudrama, "Killing Lincoln," the National Geographic Channel is turning to tablets. The network will run a one-day promotion on Sunday -- the same day the film airs -- geared exclusively to tablet users on home Wi-Fi networks.

Handling the ad effort for the primetime program based on the book by Bill O’Reilly and Martin Dugard are mediahub/Mullen, along with mobile ad network Millennial Media.

“Tablets have carved out a role in the modern home, and for many consumers, they have become an important part of the TV-watching experience,” said Laurel Boyd, VP, group media director at mediahub/Mullen.

The ad creative for “Killing Lincoln” features images of the principal characters, a link to background material and an option to view full-screen video highlights. The ads will begin running on Sunday at midday and when the two-hour movie debuts at 8 p.m. EST, the video preview in the ad will become, in effect, “live” highlights from video being aired on TV.

“The tablet experience provides a platform to not only market the film, but also give viewers a chance to find additional content live as the show is airing,” said Hayes Tauber, SVP, consumer marketing for the National Geographic Channel.

Nielsen estimates tablets are used in 20% of U.S. homes, and that 40% of Americans use their smartphones or tablets while watching TV on a daily basis. Furthermore, 36% of those ages 35-44 and 44% of people 55-64 use their tablets to enhance the viewing experience through apps and social media.

The book the National Geographic film draws on came under criticism from the Ford’s Theater National Historical Site when initially released for containing a series of factual errors. O’Reilly has said the mistakes were corrected in subsequent editions.

Lending some star power to the movie is Tom Hanks, who serves as on-camera narrator and host of “Killing Lincoln.” Billy Campbell portrays Lincoln and Jesse Johnson is John Wilkes Booth.

A Millennial Media spokesperson would not identify any sites or apps in which the “Lincoln” ad would appear but said the promo wasn’t a run-of-network buy. Millennial estimates that about 20% of its impressions come from connected devices such as tablets and e-book readers. The mobile ad network reaches a total monthly audience of about 150 million.