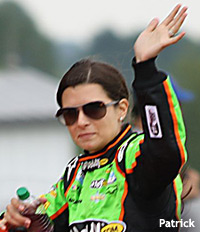 It was the best ratings for a Nascar race in seven years; in 2006 NBC posted a 10.1 household rating/20 share.

Danica Patrick was the first woman ever to win a pole position in the big race. During the race itself, she was consistently in contention among the top five or top 10 leaders for most of the race. Patrick led the race briefly -- the first time a woman has accomplished this feat.

"Daytona 500" is Nascar's typically biggest race of the season. Analyst say the big numbers were seen as a shot in the arm for Nascar -- which have endured a slow TV viewership erosion for its events. This year's Daytona 500 race was won by Jimmie Johnson for the second time.