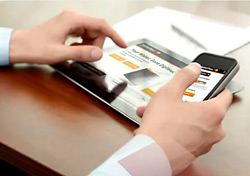 MasterCard on Monday announced the latest expansion of its mobile payment system aimed at streamlining the purchase process in retail stores and online.

The new MasterPass initiative is a rebranding and expansion of MasterCard’s existing PayPass service for making payments in-store through NFC-enabled devices and online using a digital wallet.

MasterPass allows consumers to use NFC, QR codes, tags or mobile devices to make purchases in brick-and-mortar stores, while also simplifying online checkout by eliminating the need to enter detailed shipping and card information each time.

The platform is designed to power payments regardless of device model or a user’s location. A shopper browsing a store shelf at a participating retailer, for instance, could scan a QR code with their phone and be taken directly to a Web site to buy the item using MasterPass. The customer would show a digital receipt before leaving the store.

With several different initiatives emerging in the last couple of years, the evolving mobile payments landscape has been anything but simple. MasterCard is supporting other efforts, including Google Wallet and Isis, the digital wallet venture led by Verizon, AT&T and T-Mobile that began trials in Salt Lake City and Austin, Texas.

MasterPass promises to be an open system. In addition to securely storing credit card data, address books and other information, the wallet would allow consumers to use other major credit and debit cards than MasterCard. Likewise, banks, merchants and other companies could use MasterPass to offer their own branded wallets.

Among other “value added services,” users could access updated information on account balances, loyalty programs and discount offers through its “Priceless” program. MasterPass will roll out initially next month in Australia and Canada before launching in the U.S. in the spring and the U.K. this summer.

The service will expand to other markets during 2013 including Europe, China and Brazil. It will be available through more than 5,900 merchants, including American Airlines, Grocery Gateway, MLB Advance Media, Runningshoes.com and Wintercheck Factory.