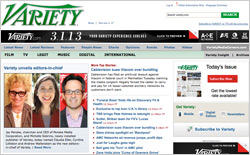 Variety will continue producing a weekly print magazine, with a new version set to debut March 26, while shifting daily reporting to its Web site. The Web site is being relaunched to make it more accessible via multiple devices, including smartphones and tablets.

As part of the transition, Variety has made a number of new appointments on the editorial side, including three editors-in-chief, with Claudia Eller, previously of the Los Angeles Times, joining Cynthia Littleton, formerly Variety’s deputy editor and TV reporter, and Andrew Wallenstein, who is being promoted from TV editor. The triumvirate will replace Tim Gray, the current editor-in-chief, who will remain with the company in a “leadership role.”

The decision to scrap both the online paywall and the daily publication leaves the weekly magazine as the only source of subscription revenues for Variety, suggesting Penske hopes to scale up online advertising on the Web site to make up for lost subscription and print and ad revenues.

Currently, print subscribers pay $99 per year, or more, for the daily publication. (The official rate is $349, but many subscribers get a discounted rate.)