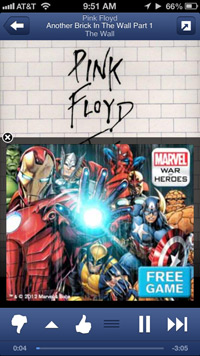 Admitting that costs of licensing music for its Internet radio service may impact its overall business model, Pandora informed its listeners that a 40 hour-per-month cap on free music streaming is being imposed. In a note on the company blog, founder Tim Westergren admitted that the “limiting music listening is a very unusual thing to do, and very contrary to our mission.” But he also explained that Pandora’s royalty rates had gone up 25% in the last three years and will go up another 16% in the coming three years. “This is an effort to balance the reality of increased royalty costs with our desire to maximize access to free listening on Pandora,” he writes.

Westergen says that the average Pandora listener consumes only about 20 hours of content a month and so won’t be affected by the 40-hour cap. In fact, he says that only 4% of the user base will be impacted by this. When they hit the limit, Pandora will offer these users various subscription options, including a $.99 plan to keep listening through the end of that month. Pandora also offers longer-term memberships that eliminate in-stream advertising.

Pandora has been battling royalty rate hikes for years. It supported last year’s Internet Radio Fairness Act, which would have altered the process for determining rates. But that bill has not been reintroduced into Congress.

Imposing the limit is also a tacit admission that ad revenues are not keeping up with costs. The overwhelming majority of Pandora listeners are accessing the service via mobile devices, where ad rates continue to struggle. The company most recently reported mobile revenue of $74 million in the most recent quarter, up 112% since the previous year. But CEO Joe Kennedy tells Mashable that the migration to mobile simply is not as mature for mobile advertising as for desktop. “We don’t know exactly what the time frame will be,” he says. “We believe that monetization on mobile will eventually get into the same range as the desktop, and I think we continue to make good progress in terms of our mobile monetization efforts.”

Kennedy adds that he does not think the usage cap is permanent -- but it is a necessary step at this stage of Internet radio’s development and move to mobile.