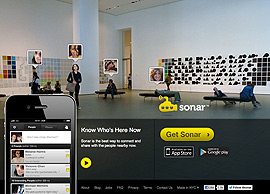 Sonar -- a social discovery service, and one of the top apps at last year's SXSW conference in Austin -- became the latest to receive financial funding from Microsoft's incubator program Bing Fund.

The companies did not disclose the investment amount.

Sonar uses check-ins on Facebook and Foursquare to connect and share with nearby friends. Friends can find each other nearby and set the type of status and information that users want to share. It also allows users to pause the technology at any time, preventing the ability to share a location until the app gets reopened.

Bing Fund, announced last summer, partnered with Hewlett-Packard and Nokia to give support to startups building online and mobile experiences, even those that do not use Microsoft technology.

While some refer to social discovery as "stalking," entrepreneurs building the technology into apps call it pushing "serendipity."

Microsoft announced its first two companies, Buddy, an app development service, and Pinion, an advertising service with a focus on gaming communities last year. Earlier this year, it announced an investment in LikeBright, an online dating service and SXSW startup finalist that will pitch on stage in March. Sonar becomes No. 5 in the list of startup investments for Bing.

A similar social discovery tool, SinglesAroundMe, recently launched an Android app with an "Approximate Location" feature that identifies the phone's GPS location by a mile or two. The company said it can identify locations from 100 feet to 100 miles anywhere on earth, relying on geographical mapping to plot location.