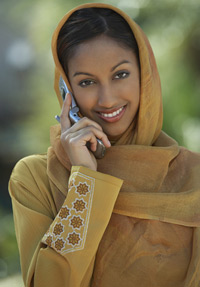 The nation in which people do the most online shopping, oddly, is Indonesian, according to the firm's study. Indonesians are also the most mobile shoppers, with 14% of consumers reporting that they mostly shop online using a smartphone, tablet, or other mobile device. Second is the U.K., where 12% of consumers say they shop mostly online. In the U.S., 10% of consumers do most of their shopping online, while a quarter of those surveyed prefer to shop in a store. In fourth place is Spain, in which 9% of shoppers use the Web. The firm says the biggest global rise in social shopping is in the U.S., with 39 per cent of shoppers using social tools (up 20% compared to August 2012).

The index also found that although Indonesians spend the most time shopping online, the UK leads in spend, with the average online buy per year at $1,700. By contrast, per the firm, Indonesians only spent around $239 per person in 2012.

Reversing that, with a focus on countries that most prefer brick-and-mortar commerce, Austria and Germany lead with 46% of consumers expressing that preference. However, the survey also found that consumers in Brazil and Taiwan prefer the shopping experience online to in-store (29% of Taiwanese and 26% of Brazilian respondents). In the U.S., more than 26% of respondents prefer to shop in a store versus online.

Bernard Luthi, CMO and COO of Rakuten.com, cites Gartner, which predicted that half of all consumer data will derive from social network identities, such as "login with Facebook," by the end of 2015. "As an industry, we need to build consumer confidence in social shopping platforms, as well as allowing shoppers to easily share content through these channels.”

"Indian Woman on a Cellphone photo from Shutterstock"