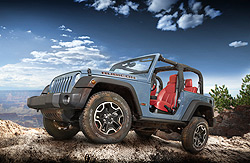 What a tough time to have an auto show in Europe. While the German automakers are in the black -- even seeing revenues at record levels -- because of sales volume extraneous to the European Union, auto sales for just about everyone are going downhill like the Rhine at Laufenburg, and that means some factories have workers honing their thumb-twiddling skills. January sales in the EU were scraping levels not seen in nearly 20 years.

And U.S. automakers were also sucked down the hole there, with GM's Opel unit pulling cash out of the automaker like a black hole. And Ford is doing little better there.

The only bright side -- and this is totally symbolic -- is that the Geneva Auto Show is being held in a country that doesn't belong to the EU and had a pretty decent 2012.

But Geneva is also a smaller show, in a more congenial venue on Lake Geneva, in a city that is all about high-end niche products -- watches -- so the show tends to feature higher-end cars from brands like Ferrari, and performance cars from just about everyone.

Thus, General Motors is using the show to tout a ragtop version of the Corvette Stingray introduced in Detroit. Rolls-Royce unveiled the Wraith there; Porsche, a 475-horsepower 911; a Bugatti Veyron dolled up by an artist; and the Lamborghini Veneo.

Jeremy Anwyl, president of Edmunds.com, tells Marketing Daily that the Geneva show has something of a favored status among automakers because it's not the massive, daunting affair that you get with the shows in places like Frankfurt and Shanghai. "Detroit multiplied by five is Frankfurt," he says. "But Geneva is a smaller, more pleasant venue. It's kind of an enclave and doesn't get the traction of Frankfurt and Paris from the consumer perspective, but executives really like it. It's like going to Aspen -- it's not the best skiing in the world, but it has a special appeal."

But he points out that the smaller size of the show doesn't mean automakers hold back there, or that they are shy about showing off mass-market vehicles. Geneva, like any global show regardless of where it is, is a bullhorn a brand, he notes.

Indeed, Fiat's Chrysler is, for example, touting its Jeep unit, complete with a themed exhibit. The new Jeep Grand Cherokee, the smaller 2014 Jeep Compass, and Jeep Wrangler Rubicon 10th Anniversary Edition are all getting the spotlight.

Ford is showing a new vehicle, the Courier, under a "people mover" brand called Tourneo that launches next year. It also showed a compact crossover called EcoSport. The automaker is also placing a focus on its Sync telematics system, which has been the source of some quality ratings issues in the U.S. The company said it will be offered in all its Euro market vehicles in two years.

“This is the most aggressive product rollout Ford of Europe has ever undertaken, and we are leveraging our One Ford global strengths to make it a reality,” said Stephen Odell, Ford executive vice president, Europe, Middle East and Africa, in a release.