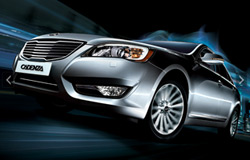 It would be a natural "auto-industry-observer" instinct to say Kia won't move up-market because Hyundai doesn't want it to. After all, they have the same corporate parent, and Hyundai has been working very hard to establish itself as a full-portfolio company that goes from mid-market to premium, or near premium. So why would the company want to face off both of its contestants against each other? Who would be more than happy to see that than competitive brands?

But Kia actually sees the Hyundai auto brand as a competitor rather than a dance partner. That may be one reason why Kia, in addition to having an exclusive brand and category relationship with the NBA, is also big in golf, where it sponsors LPGA star Michelle Wie.

And that's why the Irvine, Calif.-based U.S. sales arm of Kia is using the Kia Classic LPGA match to promote its first salvo against the polo set, the 2014 Cadenza sedan.

The automaker says the tournament, now at the Aviara Golf Club in Carlsbad, Calif., gives the winner a check for $255,000 (part of the total $1.7 million purse) and Kia's new flagship car. It has signed a multi-year extension of its title-sponsorship with the tournament.

The Cadenza, which Kia Motors America unveiled at the North American International Auto Show in Detroit this year, and which goes on sale later this year, resides above the Optima. When the Cadenza hits showrooms there will be eight models in the North America lineup, if you don't include model variants.

At the auto show in January, KMA's EVP of marketing Michael Sprague said the new flagship is a response to customer demand for something above Optima. Like all of Kia's lineup, the new car bears the design language of Peter Schreyer, the former Audi and VW designer who became Kia's global design chief in 2006.