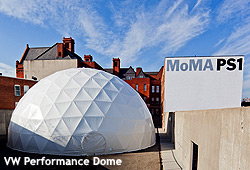 Volkswagen, which last year did a global futurist road show with the Museum of Modern Art (MoMA), is going back to the gallery with the MoMA, and MoMA PS1. The two are extending a partnership that started with the joint EXPO 1: New York, an exploration of the extent to which economic and socio-political instability this century will be detrimental to global ecology.

The EXPO 1: New York project also involves a geodesic "VW Dome 2" to be built in Rockaway Beach, N.Y., supported by an RFP to artists and architects who have to submit a short video about their waterfront concepts. The company says EXPO 1 at MoMA PS1 includes a school, a summer camp, a cinema, an exhibition of photographs by Ansel Adams, an emerging artists group show, and a large-scale international exhibition exploring the theme of dark optimism (if there can be such a thing) running May through September.

The larger play for Volkswagen is aligning the cause with its corporate "Think Blue" campaign. Volkswagen is also using the "Think Blue" platform to talk about its current and future TDI (turbo direct injection) clean diesel lineup. The automaker started marketing its trademarked TDI diesel vehicles in the U.S. under its Audi nameplate in the late 1980s, as fuel-efficient and clean alternatives to gasoline in the U.S.

Might there be a battle royal in the offing between the automaker and its German rival, BMW? The latter also has a global culture program with the Guggenheim Museum called BMW Guggenheim Lab that addresses culture, ecology and sustainability in a kind of mobile environmental-integration space it has taken to cities worldwide. BMW, like Volkswagen, began its museum association in 2011. On the green side, Volkswagen has an LEED Platinum manufacturing facility in uber-cool Chattanooga, Tenn. On the culture side, BMW has an uber-cool factory in Leipzig designed by Zaha Hadid.

The automaker has backed a number of exhibits around German culture at MoMA in the past three years including a show of Francis Alÿs' work, and Kraftwerk's music. The band, probably best known (appropriately for VW) for its Autobahn song ("Fahren Fahren Fahren Auf der Autobahn"), performed live at the museum for several shows last spring.