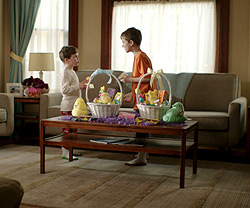 For the first time in a decade, Just Born is using TV to advertise its Peeps, those fluorescent-yellow marshmallow critters that are a staple of America’s Easter baskets. And for the first time ever, it says it will keep ads running all year long, to help the little chicks out of their seasonal shell.

In a nod to the brand’s multiple personalities, the campaign attempts to strike a balance between the candy’s classic use (the spots involve an older brother initiating a younger one to the joys of Peeps) while acknowledging the almost cult-like zeal they inspire, as he spends the day explaining the confection's many uses, including historically accurate dioramas, Peep-za, and Peeps-shi (that's Peeps sushi).

“We’re back on TV because this is our 60th anniversary, and we wanted to find a fun way to express how much this brand lives outside of Easter, and get across this idea of Peepsonality,” Matt Pye, a spokesman for the Baltimore-based candy company, tells Marketing Daily.

He concedes that in some ways, it's a brand with a built-in conundrum: “We do leave Easter alone, because what makes Peeps special is the nostalgia. Everybody regards these as part of Easter, and about 60 to 65% of our sales happen around this holiday.” (And yes, the yellow chicks are still the bestsellers, followed by yellow bunnies.) But the company has also been making strides at expanding the product line to include many other occasions, as well.

Christmas Peeps are its next biggest sellers, but the Peeps line also includes Halloween and Valentine's Day, for example, as well as sugar-free varieties -- and an expanding line of chocolate-dipped products as well. Pye says it has gotten easier to expand because of enthusiastic Moms, “who are the primary purchaser, and like to email and blog about our products, whether it’s recipes or ideas for new products.”

Social media has certainly fueled consumer creativity, whether it’s microwaving Peeps on YouTube or staging chick jousts. And, of course, there’s the Washington Post's annual Peeps Show, a diorama contest now in its seventh year, which can generate up to 1,000 entries. (Notables have included airport lines at TSA checkpoints, Occu-Peep, with all participants scaled to a 6-foot “Occupy” protester, and the infamous Peepsius Maximus, a version of the Coliseum that was so enormous it couldn't fit into the paper’s freight elevator, prompting new rules about size.

Pye says its success with chocolate has been especially gratifying, “because we are aware that Peeps are pretty polarizing. Some people just don’t like them, and think they are too sweet. And since the chocolate market is twice the size of non-chocolate, those have allowed us to bring in a lot of new users.”

While these line extensions now mean that Peeps are essentially on the shelves from September to late spring, Pye says the company will be launching summer-themed products this year, officially making the brand a year-round commodity. Those will include lemonade-flavored chicks, as well as a party-cake flavored chick.

The Terri & Sandy Solution in New York created the ad, which was directed by the Hoffman Brothers. The campaign also includes a social media element.