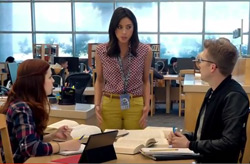 Despite all of the advances in technology and communications, collaboration -- particularly when it comes to college projects -- still comes down to people trying to coordinate schedules, much to the annoyance of others.

Microsoft looks to lure college students to its Office 365 and SkyDrive online products via a new online advertising campaign featuring actress Aubrey Plaza, who has made a name as a wry truth-teller on NBC’s “Parks and Recreation” sitcom. In the videos (directed by sitcom veteran Ken Whittingham), Plaza plays a librarian who is fed up with college students loudly trying to coordinate their group projects in her presence.

In one video, Plaza interrupts a male and female student arguing over “a stupid comma.” She tells them to use Office with SkyDrive, tells the male student he can stay and banishes the female student to “not here.” When questioned about that logic, Plaza banishes them both (before she’s tempted to shave their eyebrows.) In a second video, Plaza straightens out a group using a whiteboard to coordinate schedules -- telling one he can work from the dining hall, another he can stay in his “creepy dorm room,” and a third (“dubbed arts & crafts”) from her “unicorn stable.”

“The biggest thing we wanted to do was create relevance with college students. How do we find a way to make the idea of working anywhere come alive?” Ben Carlson, chief strategy officer at Bradley and Montgomery, the agency behind the campaign, tells Marketing Daily. “[Plaza] is relevant for college students. She has a tone that’s right for them.”

Office 365 and SkyDrive are products that allow people to use Microsoft’s products online, and store documents in the cloud for easier collaboration. The effort is intended to show students that using its Office 365 University is a better solution than using different systems (which work similarly but not well together) to draft a project and sorting out the formatting issues later, Carlson says.

The videos will be running on Web sites frequented by college students such as CBSSports.com, Pandora, Hulu and College Humor and “all of the places where students to today to take in their music and entertainment,” Carlson says.