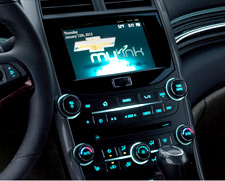 Call it an automotive version of the Genius Bar. General Motors has been working to get dealership staff up to speed on Chevrolet telematics and infotainment systems so they can explain it to potentially befuddled consumers during consideration, purchase and ownership.

Chevrolet was at SXSW, appropriately enough, to announce the addition of 25 young technology experts as "connected consumer" wise men who will travel to dealerships nationwide to enlighten staff.

The idea, per Chevrolet, is to train and certify dealership employees on how to help guide consumers through Chevrolet's MyLink and OnStar platforms -- not just in the showroom, but after purchase, when they might be stuck on the learning curve and need a tutorial.

Chris Perry, Chevrolet's VP marketing, said that in addition to serving the connected consumer the platform will be a digital sounding board for future advancements "that will continue to enhance their overall experience with their vehicles.”

Sanjay Jalona, SVP, hi-tech and manufacturing at Infosys, says that rather than consumers not getting telematics and needing help, it's often the opposite.

"We think automakers still need to better understand consumers and their changing behaviors. Trends obviously differ based on demographics, but today’s consumer is generally very tech savvy," he says. Jalona explains that OEMs need to make connected-car features a natural extension of consumers' overall digital experience, not the latest source of "gadget fatigue."

"We think the key is for the user interface to become intuitive and a natural extension of what consumers already know, thus minimizing the learning curve," says Jalona. "At the same time, OEMs and dealership collaborating to improve the consumer buying experience at the dealership is a very good thing."

Arguably, General Motors started its program in 2010 with the myChevrolet mobile app that allows owners to get access to their manuals, use GPS to do things like find their parking spot, and use OnStar to interact with their cars to do things like unlock a door, or turn on lights.

The new dealership program also reflects the automaker's efforts to get ahead of the pack. General Motors last month said it was rolling out a deal with AT&T to put 4G LTE in all of its cars. That partnership is also intended to serve as a springboard for third-party developers. In January, at the Consumer Electronics Show, both GM and Ford made big announcements about seeding application development for cars.

The Ford Developer Program is a software development kit for making apps. It involves cultivation of a development community for Ford's Sync platform, a community that includes giving developers a chance to engage with Ford engineers.

For its part, General Motors announced its own software development kit. It's basically a portal for developers to create automotive apps, even from GM's current digital products.