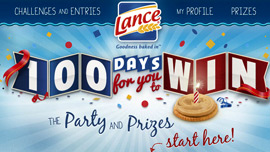 One hundred-year-old snack brand Lance is starting its next century with a repositioning that includes a redesigned logo and packaging, new product offerings and a consumer marketing push driven by social and digital platforms.

The first manifestation of the new marketing strategy is an anniversary campaign  centered on a “100 Days to Win” social sharing program/sweeps/instant-win game.

Each day for 100 days (March 11 to June 18), consumers who register can participate in a new text- and photo-based challenge, announced on the Happy100Lance.com of the brand’s Lance.com site. (For example, fans have been asked to snap and share photos of their families enjoying their favorite Lance snacks and photos of school lunches including Lance snacks, and to share about how Lance has been a part of their families over the years.)

Participants earn chances to win a grand prize of $100,000, daily instant-win prizes ($25 Visa gift cards and Six Flags tickets) and weekly prizes ($500 Visa or retailer gift cards or a Six Flags adventure package). Consumers can participate online via social media and blogs, and can view all entries and the tally of prizes won to date.

Lance’s overall new marketing strategy forgoes traditional media in favor of digital’s greater targeting and brand-advocacy-building capabilities, according to Tom Ingram, senior brand director at parent company Snyder’s-Lance, Inc. and Sloane Kelley, interactive strategy director at BFG, Lance’s creative agency. The focus is leveraging digital and social to engage moms with content and fun activities they can enjoy with their kids, they report.

The site, for example, now has a “snacktivities” tab with recipes, pairings and ways to decorate crackers with other edible elements to turn them into animal creations. Lance’s social community managers are engaging consumers with similar content/ideas and questions that reflect the brand’s voice, which Kelley describes as “approachable and fun” (“What’s your family’s favorite movie?,” “Where is your favorite place to sneak away for a snack break?”).

Lance’s snack products span a wide variety of sandwich crackers, cookies, popcorn, and nuts and seeds. One new line is Toasty and ToastChee Xtra Fulls (filled with extra peanut butter), and new flavors within lines are being made available in multipacks, as well as other sizes, says Ingram.

Lance’s is carried in grocery, mass, club, dollar and convenience stores throughout the country, and now derives a relatively small portion of its sales from third-party vending machines. However, its business model was not that long ago heavily reliant on company-owned vending machines (a business it exited in 2007, according to Hoover’s).

Hence, Lance’s marketing mission calls for educating consumers about the brand in the retail environment, as well as about its snack products, Ingram explains.

Digital marketing will be strategically supported by in-store promotion (for instance, in-store promotions will highlight new products and the “100 Days” promotion, encouraging consumers to access and participate in the activities/sweeps).

While Lance’s is up against the likes of Frito-Lay, Mondelez International and Kellogg’s snacks division, it’s now part of a company that’s grown significantly, particularly over the past decade or so.

The company changed its name to Snyder’s-Lance in late 2010, after acquiring Snyder’s of Hanover. Last year, it acquired Snack Factory (Pretzel Crisps). Other acquisitions have included Cape Cod Potato Chips and Tamming Foods (sugar wafers), in 1999; Tom’s Foods (for $40 million, in 2005); organic snack food maker Late July products (for $2 million, in 2007); Archway and private-label gourmet cookie-maker Brent & Sam’s (for $31 million and $23 million respectively, in 2008); and Stella D’Oro (for $24 million in 2009).