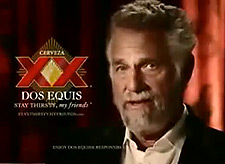 Despite the annual preoccupation with all things Irish in honor of St. Patrick’s Day, Guinness was taken down by the World’s Most Interesting Man in YouGov BrandIndex’s annual St. Patrick’s ranking of the ten best perceived beers.

Dos Equis has emerged as the biggest mover: The Heineken-owned brand climbed four spots to take the number three position. Maintaining the number one and two positions from last year are Samuel Adams and Budweiser. Corona held steady at number five.

Both Miller and Miller Lite dropped out of the top ten beer ranking this year, replaced by Stella Artois (#8) and Yuengling (#9).

The ascendency of more premium-marketed beers, such as Stella Artois and Yuengling is surprising, said YouGov BrandIndex CEO Ted Marzilli.

“Yuengling is not brewed by any of the big companies, and neither is category leader Samuel Adams,” Marzilli notes. “We think this chart is also as bit concerning for Miller, who had two brands on the top 10 last year and none this year.”

Despite its lack of a top five finish, Guinness doesn’t have anything to worry about, Marzilli tells Marketing Daily.

“St. Patrick's Day is only a single day in a calendar that is packed with potential beer-drinking events this time of year, from the super bowl to the NCAA tournament,” he says. “Guinness does score in the top 10 and typically experiences a perception lift around St. Patrick's Day.”

The rise of Dos Equis is not surprising, given the omnipresence of the brand’s advertising, he says.

“The World's Most Interesting Man campaign has become as ingrained in our culture as Allstate's "Mayhem" character,” Marzilli says. “You have to give a lot of credit to Euro RSCG for doing what so few brands have been able to accomplish: a completely-realized, instantly-recognized fictional character who clicks with that brand. Clearly the campaign has not hit over-saturation if it has climbed to the number three spot over the past year. If people can laugh at Seinfeld reruns many years after it ended, this campaign might enjoy the same success.”

All major beer brands were measured using YouGov BrandIndex’s Buzz score, which ask respondents: "If you've heard anything about the brand in the last two weeks, through advertising, news or word of mouth, was it positive or negative?" All results reflect adults age 21 and over.

None of these beer brands are clients of YouGov BrandIndex.