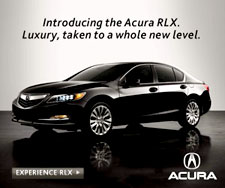 Acura is lighting the fuse on the marketing fireworks for the 2014 iteration of the RLX, which started gracing dealerships recently. The 360-degree campaign goes about everywhere this spring and summer. Well, not everywhere, but pretty far for Acura.

The automaker notes that the effort is targeted to an affluent audience (golf and print books are a big part of it), but there's also a big sponsorship of this year's men's college basketball tournament this month.

The effort comprises TV, and print, digital, social and its largest mobile activation to date. The campaign is intended to light up not only the new RLX, but also Acura itself. The theme: "Luxury, taken to a whole new level."

Mike Accavitti, vice president marketing at the Torrance, Calif., luxury unit of Honda Motor, says: "By utilizing an integrated campaign in the context of the big annual college hoops tournament, we are able to reach a large audience and still remain highly targeted."

The company says it's also targeting golf's affluent fan base with sponsorship of the Masters Tournament, the U.S. Open with advertising on CBS coverage of the events. Per Acura, the media pie is nearly equally divided among TV, print and digital, to take advantage of the targets' media-consumption habits.

Research firm Ipsos Mendelsohn, in a study last May, reported that affluent consumers – like just about everyone else – list baseball, basketball and football as their favorite sports. Ipsos MediaCT’s 2012 Mendelsohn Affluent Survey finds they also over-index for print media.

From next month through the summer, Acura RLX will be ready for its closeup on cable networks like Bloomberg and CNBC; print books like Forbes, Travel+Leisure and Wired; ads in The New York Times and Wall Street Journal; and home-page takeovers on news, sports and financial sites; and mobile and video networks. The mobile effort leverages Apple's mobile iAd units, which it used for the Acura RDX.

In terms of vehicle features, the campaign touts Acura's Precision All-Wheel Steer, Jewel Eye LED headlights and the next generation of the AcuraLink connected car system, per the company.