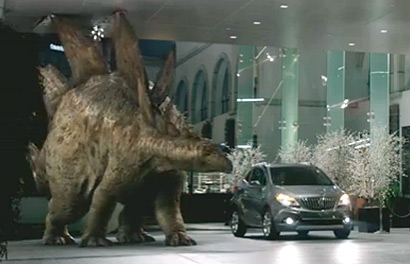 If there's one vehicle in the Buick stable that has helped change perception of the brand from stodgy to aesthetically contemporary, high-tech luxury, it's the Enclave, just shy of six years old. The problem is, the SUV has been the whole Buick crossover lineup, which is tough because the competition has been busy. One large crossover an SUV lineup does not make.

Enter Encore, Buick's new compact crossover, whose job is to put the appeal of Enclave into a smaller package. The car, which has more stamps on its passport than Hillary Clinton (designed and engineered by Opel in Russelsheim, built in South Korea and Shanghai, sold in the former as the Mokka, in the latter and North America as Encore, and in the U.K. as the Vauxhall Mokka) is getting its first TV spot, airing during ESPN's coverage of NCAA hoops.

The focus is on how "small" can take on "big." Though Jackie Chan (albeit from Hong Kong, not Shanghai) might have been a good visual to make that point, Buick has gone with dinosaurs. The idea is that competitive luxury crossovers are lumbering saurians.

The ad shows the crossover swerving down urban streets, avoiding the big brutes. The spot -- in which the car has to avoid Rex and his brethren -- makes a point that although the vehicle has the benefits of compactness, it has the qualities, such as a five-seat configuration, and nearly 50 cubic feet of seat-down storage, that suggest a larger x-over.

“There’s a misconception in the luxury car market that the best amenities and technology are limited to larger vehicles,” said Tony DiSalle, vice president of Buick marketing, in a release. “With vehicles like the Encore and Verano, Buick is redefining customers’ expectations with a great combination of content, efficiency and passenger space in a smaller overall package.”

If the dinosaurs bring back pre-Cambrian images from the 90's, it's because AOR Leo Burnett's Troy, Mich. office tapped Tippett. That's Berkeley, Calif.-based Tippett Studio, who penned the Velociraptors and that man-eating T-Rex for 1993's "Jurassic Park." Which means Tippett itself has outlasted the dinosaurs.

“We have decades of experience imagining how dinosaurs moved when they roamed Earth,” said Phil Tippett, founder of Tippett Studio, in the release. “Making those Raptors slide through Jurassic Park’s kitchen required an innovative combination of stop-motion animation and computer graphics. For the Buick commercial, we could do it all on computers, allowing for more life-like muscle movement.”