Adidas Goes All In Worldwide For Girls 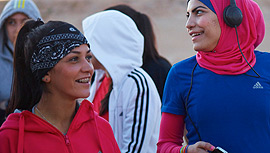 Adidas is bringing girls together worldwide with a new social program, #mygirls, part of the company's "All In" campaign launched in 2011, its biggest to date. The effort, for girls and women 14-23, with a core focus on 17 year olds, is meant to get girls to engage with the brand by sharing their athletic pursuits, and advise and encouragement each other.

The company says the central hub for the platform is at www.adidas.com/mygirls with an API that allows integration with Twitter and Instagram. The brand gets its name and products in the mix with elements like Adidas-themed news, products, and style trends.

Some of the content is under the aegis of a #mygirls zine about new groups of girls, new product stories, and new ways to get involved in community events and activations.

The campaign also provides users with access to Adidas’ female athlete partners, celebrities, stylists and trend setters, per the company. There are also a series of videos at the MyGirls.Adidas.Com site, in which girls in different countries doing different sports confront challenges both inherent to the pursuit, but also with regard to social mores. One film, for example, deals with a team of female boxers in Amman, Jordan. "I don't care if it's for boys or for girls," says one.

John Norman, CCO at TBWA\Chiat\Day\LA, which handled creative, tells Marketing Daily that the campaign is not just for Adidas fans. "Girls bring the 'all in for #mygirls' message to their real-life friends and followers on social media," he says. "So this is an opportunity that not only builds equity among people already loyal to Adidas but also helps spreads the 'all in for #mygirls' message to all girls online."

The program, which launched on International Women’s Day, is supported by retail, PR and online activations. An "All In for #mygirls" TV spot hits Russia, Korea and China, with further markets rolling out the advertising in staggered waves thereafter, per the company.

Norman tells Marketing Daily that the campaign's TV ad vector is the first globally led women's TV campaign from Adidas It shows that "Girls from all over the world and from all different walks of life, though they may be different in terms of what language they speak or where they live, all share a common passion for sport and love for 'their girls,'" he says. "By including real girls from Nigeria, Brazil, Jordan and UK in the TV spot, we've accomplished a truly global connection and shared passion for sport and #mygirls."