America Reins In The Easter Rabbit 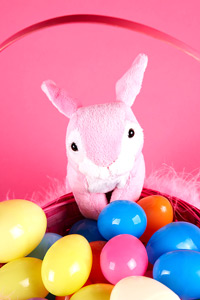 A new survey from the National Retail Federation reports that Americans will put the Easter bunny on a budget this year, spending $145.13 per person. That’s down a bit from 2012’s $145.28, which the Washington D.C.-based trade association chalks up to lingering concerns about family finances.

In all, spending on such things as candy, flowers, cards, family dinners and new Easter duds is expected to come in at $17.2 billion. It continues to be the second-biggest holiday for retailers.

Of those who celebrate Easter, the biggest percentage -- 91% -- will spring for candy, spending an average of $21 -- while 87% plan on cooking brunch or dinner to celebrate, with an average outlay of $45.26 on those meals. And nearly half will purchase clothing, shelling out an average of $25.91 on new outfits for the family.

Another $9.49 is earmarked for flowers. (While the holiday isn’t nearly as big a deal for florists as the winter holidays, the Society of American Florists says it still represents roughly 13% of annual transactions, and 10% of dollar volume. Christmas/Hanukah, Mother’s Day and Valentine’s Day are all bigger.)

For this holiday, discount stores are the biggest attraction, with 63.4% saying they will head to such stores as Walmart or Target. And 40.7% intend to do at least some of their shopping at department stores.

The survey, conducted by BIGinsight Consumer Insights and based on responses from more than 5,000 adults, also highlights the tablet’s growing influence on shopping habits. While 43.3% of those with smartphones say they plan to use them for shopping research, and 15% say they will buy something with them, 51% of tablet owners plan to use them for shopping-related searches, and 22% will actually use them to make a purchase.