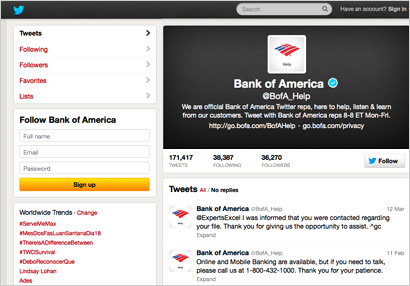 Financial services firms have historically been cautious when it comes to social media for fear of running afoul of compliance rules around communications. For guidance in emerging areas, companies rely on regulatory bodies like the Securities & Exchange Commission about how to proceed safely.

In that vein, the SEC on Friday issued a new "Guidance Update" on the use of social media that provide more specifics on what types of communications and marketing on social properties have to be reported under the Financial Industry Regulation Authority (FINRA).

“The SEC staff has learned that out of an abundance of caution, many mutual funds and other investment companies may file materials on their social media sites with FINRA unnecessarily,” stated the update. In short, the agency is saying not every tweet or Facebook post triggers the filing requirement. Among social media posts that don’t need to be filed with the agency:

*An incidental mention of an investment company or family of funds not related to a discussion of its investment merits. As an example of an acceptable tweet in this regard: “Consumer Reports has written an article in which it mentions our Brand X Rewards Card. Are you a card member?"

*Incidental use of the term “performance” in relation to discussion of an investment company or fund without specific mention of a fund’s return. So the word “performance” can be used as long as it’s not to promote a fund’s return. For example: Click on this link (Web site URL) where we provide full details of our yearly performance since inception.”

*A statement unrelated to the merits of a fund that includes a hyperlink to general financial and investment information. The SEC notes a company can tweet things such as: “Here’s a Q&A with our Portfolio Manager, John Doe, regarding his views on the economy for 2013. Or: "Gold and silver have provided a relatively low correlation to stocks and bonds over the last few years.”

*A response to an inquiry by a social media user providing factual information without discussing the investment performance of a fund. If someone asks what the NAV (Net Asset Value) for a certain fund is on a given day, for instance, a company can reply by giving that figure.

“The SEC is clear in telling financial service firms they can talk about their products, provide links to their products and share general market commentary without needing to file this content with FINRA--just don't tweet returns and investment merits,” states Augie Ray, an ex-Forrester analyst and former social media leader at USAA, in a blog post today about the SEC’s new guidelines.

The ex-Forrester analyst argues that the industry has been overly cautious and conservative in its approach to social media, missing opportunities to benefit customers, as well as their own businesses. He suggests there is room for companies to embrace social media more aggressively.

In addition to the updated SEC guidance, he points to proposed guidelines issued in January by the Federal Financial Institutions Examination Council.That group is an interagency body encompassing several government financial entities, including the Board of Governors of the Federal Reserve System and the FDIC.

The document, among other things, says financial institutions may use social media for marketing, providing incentives, facilitating applications, inviting public feedback, and engaging with current and potential customers.

Ray cited American Express as an example of a financial services company that is already treating social media as a vital business tool. In addition to its Small Business Saturday program, AmEx is seen as a social leader for its initiative allowing customers to sync accounts with the likes of Foursquare and Twitter, and most recently, through its tweet-to-buy program.