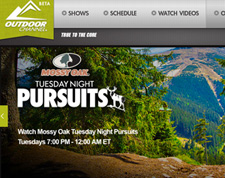 The mid-size cable network Outdoor Channel had a mixed fourth-quarter earnings period, which comes just after its recently announced sale.

But fourth-quarter net income slipped to $1.25 million, down from $1.46 million. The company blames higher advertising expenses and an increase in program production. Full-year net earnings were at $1.89 million, up from $1.85 million in 2011.

Tom Hornish, chief executive officer for Outdoor Channel, stated: "We delivered steady revenue growth at our core [cable network] unit during the fourth quarter and for the full year as we continued to capitalize on our category leadership position. ... We also made significant gains in our total household distribution, adding another one million homes in the final quarter of 2012."

The company says Nielsen attributes Outdoor to having just under 40 million subscribers coming from cable, satellite and telco distributors.

Last week, Outdoor Channel agreed to be acquired by Kroenke Sports & Entertainment, a deal valued at about $227 million. The transaction is expected to be completed in the second quarter.