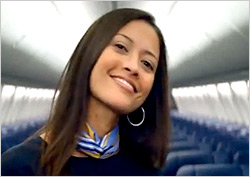 Southwest Airlines is taking a more serious tack with a campaign that broke Tuesday night during the NCAA Tournament opening games.

The first work from TBWA\Chiat\Day, it carries the theme “Welcome Aboard.”

The ads -- including the 60-second launch spot -- will run during all rounds of the NCAA Tournament, which will be aired on a combination of the CBS, TBS, TNT and truTV networks.

The launch spot uses the song “Some Nights” by the rock band Fun and features a mix of Southwest employees and with actors, including a baby crawling earnestly down a wood-floored hallway in its home. The airline compares itself to entrepreneurs and mavericks who “find their own path, chart their own course” and “never stop moving forward and never, ever back down.”

Such people “believe the American dream doesn’t just happen; it’s something you have to work for,” the announcer proclaims, adding that at Southwest, “we never stop looking for a better way.”

“It’s how we’ve grown into America’s largest domestic airline,” the commercial concludes. “We are Southwest. Welcome aboard.”

The campaign tells the story of what Southwest stands for, said Bob Jordan, Southwest Airlines’ executive vice president and chief commercial officer, in a release.

“Southwest’s values are based on our customers’ values,” he said. “The decisions we make for our airline reflect these values, and we translated that vision into a reality in these new ads.”

The campaign was shot in both Houston and Los Angeles. An additional national spot focuses in on the in-flight experience; Wifi availability, Live TV, and revamped interior with new leather seats and larger overhead bins. In its third spot, the brand highlights its best-in-category loyalty program.

The ads will run for eight weeks nationally. Southwest released the ads over the weekend on Facebook and Twitter, and they received positive comments from the airline’s fans and followers.